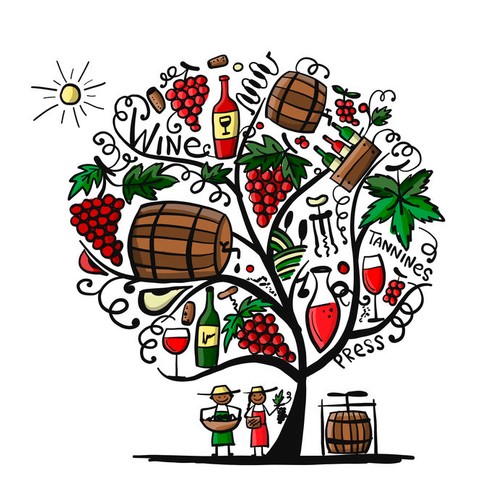 Many of the thousands of people who visit the Sonoma Valley each year have asked me about various vineyard activities.  “What were all those workers doing in the vineyard as we drove past?”  Or, “The vineyards were full of milk cartons.  How come?”  These, and other questions I will try to answer in my blog entries for 2020.  I hope you will find what follows interesting, and perhaps a handy reference for the next time you visit a vineyard.  The vineyardist’s work is really never done.  As seasons change, so does the care we must lavish on the vines, and this is my calendar.

January
Vine pruning continues from December.  As each row is completed the vine’s trellising system is repaired and re-tensioned as necessary.  Then the vine’s canes are tied by hand to the trellis wires.

February
The last of the pruning and cane tying is completed this month.  It is immediately followed by inspection and repair and/or adjustment of vital frost protection equipment.  If late this month the vineyards are dry enough to support the equipment, we apply fertilizer to the soil.  Our Le Gemelle vineyard is also a wildlife preserve and this month we may see over 4,000 ducks fly over the Carneros appellation on their migration north.

March
Bud break occurs as the vines awaken from their winter’s sleep.  Each bud will eventually unfold to become two bunches of grapes and leaves that protect the fruit during summer’s heat, and provide nourishment to the berries and vine.  March also marks the beginning of the spring frost season, and we must be on the alert to protect the tender new buds from the cold.  With an eye on the weather, we begin discing the vineyards to loosen the soil which is compacted from winter rains.  The discing also chops up canes pruned from the vines in the previous two months and turns them under together with weeds, both adding mulch and nutrients to the soil.

April
Vines are very susceptible to frost at this point in their growth, and April shows high frost incidence.  Frost can wipe out an entire vineyard if unprotected.  When temperatures dip to 34º, an alarm system warns us to jump out of our beds and into the vineyards to confirm our frost protection equipment is working properly.  Some nights, we don’t get much sleep.  My Dad used to call this period of time, “long days and short nights.”  Meanwhile we continue discing, for aside from other benefits this type of cultivation exposes the bare earth which, being dark, soaks up the sun’s heat by day and releases it during night when frost usually occurs.  Everything we can do to maintain vineyard temperatures counts during this critical period.  Now we must also walk the vineyards, particularly new plantings, to check that each young vine is showing the correct vigor.  Weak vines, or those not growing properly, are marked for removal, counted by variety, and replacements are ordered from a vine nursery.

May
We continue fighting frost as we enter a second critical period in the vine’s spring growth, the flowering of the vine or “bloom.”  A prolonged heavy rain or hard frost during “bloom” – generally lasting about two weeks – can dash our hopes for a bountiful harvest.  Now vineyardist’s hand-plant the replacement vines, placing a milk carton around them as protection against animals, and hand-water each vine weekly.   The vineyards are again cultivated, this time with a special device called a French plow which is equipped with a striker bar that allows it to swing aside and safely pass each vine.  Thus cultivation can take place between vines without damage.  “Suckering” is another important job, removal of shoots from the vine trunks that sap their strength.

June
Early this month the frost season ends and “set” occurs, the term we use for the miracle of Nature that transforms grape blossoms into tiny grape berries.  At this point we begin to have some idea of the harvest we might expect, although it is still much too early for definite predictions.  All two-year-old vines are now given special attention.  On each vine the strongest cane is selected and tied to its stake while other growth is removed.  The vineyards receive their final grooming as we again disc to eliminate the last of the weeds that can draw nutrients from the soil or rob vines of moisture during summer.  Particular attention is given to the morning glory, a notorious vineyard weed that can strangle vines if not kept in check.  Insect pests such as aphids and leafhoppers must also be controlled at about this time.  Rather than spray insecticides, we prefer natural control and release thousands of ladybugs into the vineyards.  The colorful little ladybug is the natural enemy of aphids and such and makes short work of them.  While the ladybugs are doing their job, ours is the unromantic hoeing of weeds around the base of each and every vine.  At an average of 450 vines per acre, this means that over 26,000 vines are hoed in our Le Gemelle vineyards alone.  My Dad said this builds character.

July
Although the grapes were smaller than the head of a pin in June, this month they are already half-size.  Once again it is time to sulphur the vineyards and should we experience an unusual summer rain, an additional application might be required.  New vines continue to be hand-watered and given other attentions such as the removal of sucker roots that might form.

August
The grapes have now reached full size.  Red and black varieties are already showing some color.  Hoeing continues, as does the weekly watering of newly planted vines and the many species of trees we have set out around the edges of the vineyards adding to their beauty and providing shelter for birds.  All grape handling equipment such as hoppers, crushers and conveyors are checked and re-checked as last minute preparations are made and all hands gear up for the harvest.

September
Harvest begins this month with the picking of early maturing varieties such as Gewurztraminer and Chardonnay.  Sprig ducks may arrive as the vanguard for millions of migrating waterfowl that have summered in the north.  Hundreds of ducks and geese use our vineyards as a safe resting place, and we hope many elect to stay the winter.

October
The harvest is in full swing, with one grape variety after another reaching optimum ripeness and demanding to be picked.  Harvesting often begins before dawn and continues until nightfall.  The vineyardist’s day stretches to twenty hours, but no matter, since for a year they have been toiling toward this moment.  Month’s end marks completion of the frantic harvest with picking of Cabernet Sauvignon.  Although the last of these grapes may not leave the vine until the first week of November. Other varieties have already started defoliation, slowly dozing off toward their winter sleep.  But for the vineyardist, another cycle of patient hard work is about to begin.

November
As the frantic harvest ends the vineyardist’s year begins.  The vines are well along in dropping their crimson and gold leaves as they enter their winter dormant period.  “Pomace” (grape seeds and stems from the crush) are hauled to the vineyards and spread between the vine rows to add mulch and nutrients to the soil.

December
With the vines fully dormant the annual pruning begins.  Two methods are generally employed:  “cane” and “head” pruning.  Each is designed to limit the vine’s production to increase grape quality, and to spread out the coming summer foliage for maximum exposure to sunlight and air.  Head-pruning is the traditional technique.  The more modern approach to the same end is to train the canes to trellis wires.  Cane-pruned vines facilitate picking.  Meanwhile, hard-working farm machinery:  tractor and other vineyard equipment is overhauled in preparation for spring.  A breakdown can mean critical delays, so great care is taken to ensure that all machinery is in first-rate condition, a project that often begins late in November and is not completed until early March.

A good deal of our time in December is given over to tasting evaluations.  This is the time when new wines first “make themselves know,” and allow us to gauge their cellaring needs.  Before we realize, the month and the year and over and another growth cycle begins.

As I mentioned in my first entry in 2019, these blogs will be presented to you from the perspective of a California vintner whose family has been making wine in America since 1904, and has been dedicated to excellence.  I hope these blogs will help you to better understand wine and adds to your enjoyment of it.  Should you have any questions or comments, I can be reached at winemaker@lachertosawines.com.