September through October is the special time on the vintner’s calendar.  For the entire year we work in the vineyards, tending our vines in a wide variety of ways:  pruning, tying and cultivating, with all these efforts directed to our moment of truth…the harvest.  But all grapes are not picked at once, only in the order in which they ripen, varietal by varietal, over approximately a two-month span.  Generally, we begin about the end of August with the early-maturing varietals such as Pinot Noir, Aleatico and Chardonnay.  By the time we have finished these, the mid-ripening varietals, like Zinfandel, have reached maturity, and we go on to pick them.  Finally, around mid-October, we wind up with the late-maturing grapes that include Barbera and Cabernet Sauvignon.  The actual dates when harvest begins and ends varies from vintage to vintage, weather and climate determined.

Many people have asked me how grapes are picked these days.  The techniques vary from traditional hand-harvesting to mechanical harvesting, and/or a combination of both.  I still prefer the traditional hand picking method for our varietals.  I have carefully studied the progress of mechanical harvesters and may someday include them, but only if they can help us improve wine quality. 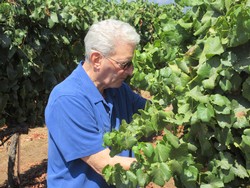 During harvest, the prime element is the pickers.  Historically, they are composed of migratory workers following different crops, along with our friends, family and winery staff.  The second most important element is the device to cut the grapes from the vines.  Mainly it is a sharp knife with a hooked end, developed in ancient Italy and virtually unchanged.  In recent years various type of strong shears have been tried, but many pickers still prefer the ancient hooked knife.  Grapes are picked cluster by cluster, and the knife seems to be the most efficient device yet.  This proves that technology cannot always usurp tradition.

As I reflect on vintages past and those I remember hearing from my father, and his father before, times past seem a bit more simple than today.  In my grandfather’s day and long before, a long basket called the “gerla” was strapped to a man’s back, and used to carry grapes to the nearest road where there was a waiting wagon with a wooden vat mounted on it.  The picker had to climb a ladder to dump his grapes into this vat, which when full was hauled to the winery.  Since in those days people rarely rushed, nor did the horses that pulled the wagon, grapes took a long time to reach the winery and lost a lot of their fruitiness in the process.  In later years the gerla basket and vat were replaced by the lug box that could be stacked on a flat-bed wagon or truck.  This was not quite as picturesque, but faster unless the truck broke down, which they had a way of doing.  Most importantly, fewer grape skins were broken, so they reached the winery in better condition, and some oxidation was prevented.  Oxidation occurs when air reaches juice inside the grape, robbing it of freshness and character.

Even less picturesque, but far more efficient, faster and better for the grape, is the modern method of transporting the harvest from 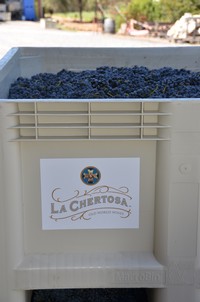 vineyard to winery.  Today we use small carts called gondolas or the square plastic “micro bins” I mentioned in last month’s blog entry.  Pickers place their grapes in special buckets that when full are not dumped, but “poured” into a gondola.  The gondola is built very low (underslung) and has low sides to make this possible.  When full, the gondola is constructed in such a way that both it and the load of grapes can be lifted and tilted so that grapes roll directly into a receiving hopper that transports them to the crusher.  Micro bins are lifted on to flatbed trucks and driven to the winery.  Speed is essential during harvesting of all premium wine grapes.  Any delay between the moments the grapes are picked until they reach the crusher could upset the balance (sugar, acid, and pH) that we want.  The pickers work fast, usually in a team, and most are paid on the basis of the quantity picked during the time period.  For some extremely difficult to hand-harvest varieties, pickers work on an hourly wage.

It is extremely hard work.  I’d be kidding you by trying to paint a romantic picture.  Picking begins before dawn, continues through the morning and often under warm temperatures.  Bees love juicy grapes and have been known to attack pickers in the vineyard.  If we’ve had rains and more are predicted, picking then requires working in muddy fields and getting wet as well.  Finally, harvest occasionally follows a start and stop pattern, meaning picking for a few days, waiting around for maturity to be reached in other grapes, and then working like gangbusters again.  No, it is definitely not fun.

Among alternative methods of harvesting wine grapes, the mechanical harvester is also utilized.  In order to be effectively machine harvested, the vines must be trained along trellis wires.  This makes it possible for the harvester to straddle a row of vines.  As the machine moves forward operated by the driver, batons mounted within the machine strike the vine and knock off the grape clusters.  They in turn fall to the harvester’s low-slung conveyor and end up usually in a gondola or micro bin.

Mechanical harvesters today are much improved over the first ones used in the vineyards.  The first trials in Northern California regions revealed considerable damage done too many vines, some of which were destroyed.  Secondly, many of the mechanical harvesters knocked off too many leaves as well as grapes which often went directly into the fermenters along with the juice.  That imparted a strange “leafy” character to some of the wines.  Today, most of the problems have been eliminated through refinements in the design of harvesters.  As a result, their use has increased dramatically.

The most obvious advantage of the machines is economy, but other should be mentioned here.  The machine can pick one acre of grapes in one hour, but it takes at least ten people working three hours to cover one acre.  Machines, though expensive, can in the long run save on labor costs.  Comparative studies also showed that the machines leave fewer grapes on the vines than is the case with a hand-picked vineyard.  With recent improvements, the machines are better at picking only the ripe clusters, not those that are unripe and thus refuse to fall off the vines. 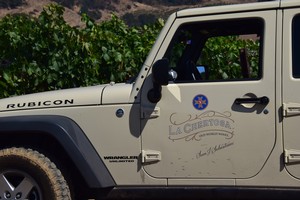 The biggest advantage that interests even this traditional vintner is that machines work 24 hours a day.  Better yet, they can be operated after sundown, right through the night and early morning hours.  After sundown, the metabolic activities in grapes slows down which means, they remain at their optimum level of maturity and can be picked at that “right” moment.  Secondly, the grapes and their precious juices are at cool temperatures.  Cool grapes means that once crushed, the juices can begin fermentation at a desirable cool temperature.

The pros and cons of machine harvesting are just one other area that occupies the thoughts of a vintner.  We still believe in hand-picked grapes as the best approach, not because it is traditional, but because it is the proven, reliably best method for fine wine quality.  As least as of today.

After the grapes are picked, and before they are crushed, they are checked load by load at the winery.  Though we make our own quality tests prior to picking, the grapes at the winery are tested by an official of the County Agricultural Department standing by at the winery scales.  By means of a coring device, three samples are taken from each load.  These grapes are crushed, their juice placed in a beaker where the temperature is measured (to assure accuracy), and then with a refractometer the sugar content is determined.  All this information, along with the exact weight of the load, variety, and type are entered on a form.  It becomes part of a permanent record, which State and Federal Government officials check periodically.  This data obtained at the scales is where the case history of each wine begins, attached to the case history of the vineyard from where the grapes came.  To us, this official test is also important because some growers with whom we have contracted for their grapes are paid on the basis of sugar content, total acidity, and pH.

The grape growers are paid on a per ton basis, but we work with them very closely.  Knowing the history of their vineyards, we 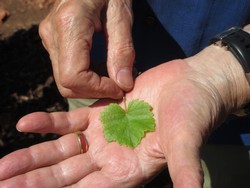 stipulate our desired standards for sugar, acidity, and pH.  To us, this relationship is more like a partnership with our growers than a straight business deal.  Our vineyardist monitors the progress of the grapes from growers as carefully as they do those from their own family vineyards.  When harvest is nearing, we are in constant communication with our growers.

To say that the harvest season is hectic is an understatement.  The vintner is in the field one moment, standing by the crusher the next, and often on the telephone as well.  To coordinate all vineyard activities with the winery requires non-stop motion and decisions.  When the grapes are ready, we have to make sure the crushers stand ready for their arrival and also that we have fermentation tanks or barrels available.  This could become a problem in mid-harvest or toward the end of it when the vintage is such that many varieties are ripening at the same time.  Thus, we always want to have more fermentation capacity than we could possibly need at any one time.

Burning the midnight oil, something every college student has done, also applies to vintners in the harvest time.  Quite often, during September and October, the cellars lights are on all through the nights for several consecutive weeks.

Hectic?  By all means.  Exciting?  Yes, and despite being involved in many harvests, each one is just as exciting.  Each one manages to assume its own personality, to challenge us in some way, to give us another opportunity to learn.  Each wine brings us the stuff of a vintner’s dream.